CNC programming with G-code – What is that actually?

The G-code, also called DIN-code, is a machine language with the help of which the programmer tells the CNC machine what it should do.

CNC stands for computerized numerical control and means that the machine is controlled by a computer.

The G-code is called like this because many commands start with a G followed by a number (e.g. G56).

In fact, however, there are various commands with all possible letters from A-Z of the alphabet. The sum of the G-code commands results in the machine program. 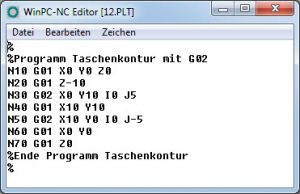 Since the G-code is largely standardized, it can be executed on almost any CNC machine.

As soon as the machine program is loaded into the machine, the job runs almost fully automatically in the ideal case.

How is the CNC program structured?

The CNC program is composed of several so-called blocks.

A block corresponds to exactly one line in the machine program. The block in turn consists of one or more commands. In the English-speaking world a block is also known as a “strong> block”/strong>.

The command usually consists of the address letter and one or more parameters.

Each record begins with a unique counter number, which is incremented in steps of ten (N010, N020, …).

This gives you enough space to add up to 9 command lines between two existing G-Code commands.

In the following command line (N020) the position X=100 and y=100 is approached at normal speed (G01), the travel distance is linearly interpolated.

In this example program we want to mill the contour of a pocket. This should be 20 mm long and 10 mm wide.

The arcs are to be tangential to the straight lines. For the arcs we use the command G02 (clockwise arc).

To edit and visualize G-Code you can download the free G-Code Viewer and Editor NC Corrector. 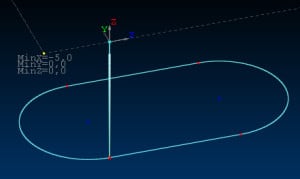 Pocket contour run off with G02

Below you will find a list of the most frequently used commands and functions.

The commands for the CNC programmer range from moving the axes, tool path compensation and storing the tool radius to tool change:

Overview of all address commands:

According to the DIN 66025 / ISO 6983 standard, the following address letters are available:

Unfortunately, I cannot go into all commands in detail at this point. Here I would like to refer to the manuals of the NC software providers, which document the individual commands in great detail and extensively. You can also find a very extensive list in the RepRap Wiki. 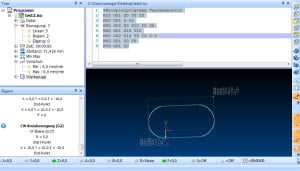 For easy editing and visualization of G-Code I find the G-Code Viewer and Editor NC Corrector great. NC Corrector is easy to get started with CNC programming and to learn the basic functions.

If you want to visualize in addition to the toolpaths also the machine and more complex things you can also have a look at PALmill, which you can download for free under the following link: http://www.hubertklinkner.de/palmill/

So that you don’t have to program everything by hand, it is obvious to use a ready-made software, which generates the G-code for you as far as possible independently from the 3D model:

To get from the 3D design to the finished product, you have to go through the following steps: 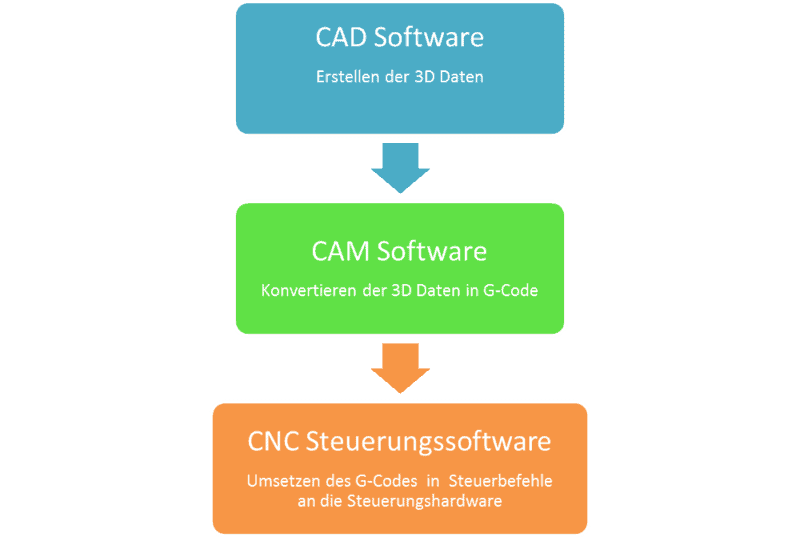 Not every CNC programmer has a professional machine at work or at home with a professional control system from Heidenhain, which does everything in no time at all.

For this reason I have put together a short list where you can download suitable CAD CAM programs for free:

To run the G-code in your machine, you need appropriate CNC control software for running the G-code.

Especially Mach 3 for the PC and GRBL for Arduino should be mentioned here.

Please leave me a short comment with your opinion about CNC controls.

Mathias
“I think you’ve saved me quite a bit of frustration with your explanation!”

Johann
“For my CNC in design, I found very interesting information on controls.”

Michael
“Thank you for your detailed reports”